Is it possible for something as mundane as a yard sale to really be laugh out loud funny all day long?  And still days later?  Or should I say yale sard as Emily mistakenly started writing on one of the signs the night before, a few glasses of wine down already.

It is.  It really was that funny.  Maybe it was a “you had to be there” kind of situation but let me try to recap our wildly successful First Annual Fab Four Flea that was described as “an outstanding day” by Ryan.

Try 6:15 am!  At 6:15 people started showing up.  Not one but 2 hardcore yardsalers nearly 2 hours early.  It was downright annoying but the first early bird turned out to be our best customer buying all of the costume jewelry he could get his hands on and get this, a load of VHS tapes.  What the?  I would’ve never thought in a million years…VHS tapes.

By 7 am the place was swarming.  So much so that we barely had time for ridiculous pictures modeling the merchandise.  No time for tweets or facebook updates or mimosas.  I really thought this would be a leisurely sip your cocktail in the yard kind of morning.  Boy, was I wrong.  We were working and working hard! 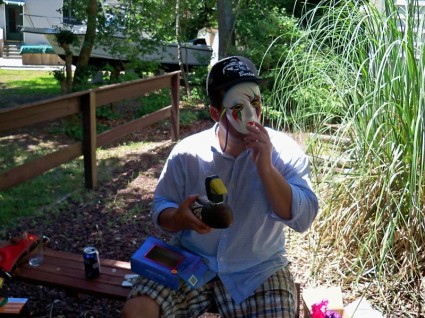 Did I mention that I got up at 5 am?  On my own I just jumped out of bed at 5.  I was having nightmares of early birds rummaging through our merchandise.  I saw the sunrise while pricing the never-ending pile of junk we planned to sell.

Enough of the early birds.  Let me tell you about the late birds, shall we call them.  The crazy post yardsaler who came back to claim a never there sugar bowl lid in the remarkably low-priced China dish set she bought.  She’s the same lady who asked me to wrap up her package like she was shopping the wedding registry at Bloomingdale’s.  Get a grip!  This is a yard sale.  She left a note with her number requesting the lid she thought she left behind.  I guess she didn’t realize the set was about 90% off of retail price because it was incomplete.

Antics like that went on consistently from 6:15 til about 11.  That’s when the big lull hit and we started getting lingerers.  People who would stay too long to talk to us after their transaction was complete.  But even worse were the drive bys.  People who didn’t even get and look.  No one drives by our yard sale and doesn’t get out! After 2 slow down and gazes at our dwindling event followed by obnoxious 3-point turns, we realized we had to do something to inject energy back into the sale.  Emily took matters into her own hands at this point and started posing as a yard sale customer.  Of course we thought she was nuts (she is.) and were laughing hysterically at her but lo and behold it worked!  She created interest again and the drive bys subsided.

Sales picked up for the final hour and a half.  It could have been our “secret shopper” or it could have been our BOGO sale that got things moving.  Jackie also had a tactic where she’d pick up an item in front of a customer and put it back down.  It piqued their interest in the item more than a few times.  We may never know the best tactic!

By 1 pm we swapped merchandise that didn’t sell and we each kind of had our eyes on anyway.  No, I didn’t get the low-priced Coach duffel.  It sold for $15!  There were definitely items for sale that I would’ve bought at another yard sale.  If only I wasn’t trying to sell them at my own.  I know it doesn’t make sense.  Whatever.

Overall, we really moved a lot of stuff.  Shane, one of the guys, physically moved it all around to continually keep the displays fresh and exciting but the customers moved it out.  We only packed up a few small boxes at the end to be donated.  The shocking (or maybe not?) items that didn’t move at all were Shane’s vintage Bradford Exchange Marilyn Monroe dishes so if you’re in the market, I know a guy.

You are probably wondering if I met my goal.  Remember that goal?  A case of Cape May wine.  I sure did!  As a group, we far exceeded the goal.  After cleaning up, we went straight to the winery to drink our earnings.

Ever had a wildly successful yard sale like ours?