About a year ago, we gave the beach house bathroom a minor update with some paint.  The 80’s floral wallpaper was literally falling off of the wall.

Ohmigosh, removing wallpaper sucks.  Especially in a small space.  We kept bumping into each other…but atleast there was a pretty snow storm to admire outside.

A little elbow grease and a lot of bumping into each other later and we had ourselves a newish bathroom.  Oh the power of paint!

Of course I chomped at the bit to accessorize it.  When I was out antiquing, I picked up these adorable fish wall pockets.  Aren’t they cute? 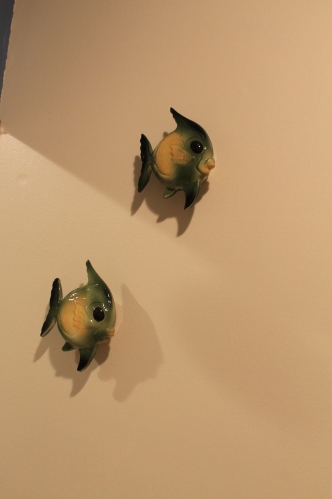 And at an estate sale, I grabbed this Victorian Cape May house.  I didn’t grab the actual house.  I bought the quirky watercolor from a woman who previously owned the Bed & Breakfast pictured.  Loved that aspect of the story.

When I got it home, I realized it was an odd shape that you couldn’t easily frame.  7×10 or something.  Let’s be honest, I wasn’t going to have it custom framed and matted.  The picture was only about 2 bucks.  Custom framing is expensive. I did it once for some reason and it cost like $50.  So I found an 11×14 frame that was lying around and just popped the watercolor in over some white paper.

I wasn’t fooling anyone though.  It needed to be matted.

That task was on my to-do list for nearly the last year.  Finally, last week.  I got around to doing it.  Hip hip hoorah!

The previous owners were kind enough to leave all of the wallpaper remnants behind.  And I do mean ALL of them.  Every room had 1980’s wallpaper.  Fun.

I’ve been itching to put the vintage wallpaper to good use.  By “good use” I don’t mean back on the walls.  Blah.  I’ve seen them used frequently for shelf liner.  I like that but came up with another idea for this particular project.

Using the floral wallpaper remnant, I matted the cute little watercolor in the too-big-for-it-frame.  This was the same pattern that once papered that bathroom.  I thought it was kind of a nice tribute to the history of the room.  Not to mention the muted colors seem to provide some whimsy framing that green Victorian house.

To create the matting, I cut an 11×14 section of wallpaper. 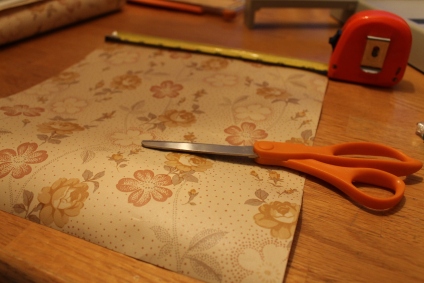 Then decided on a 2 inch mat.

I measured the 2 inches and used a paper cutter to cut out the middle section.

I glued the picture to the matting 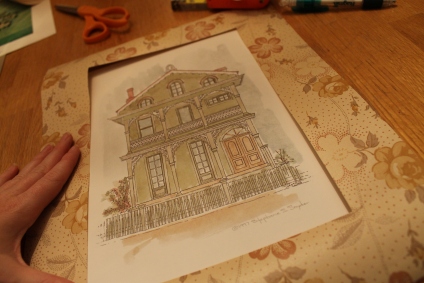 and framed it back up.  Voila! 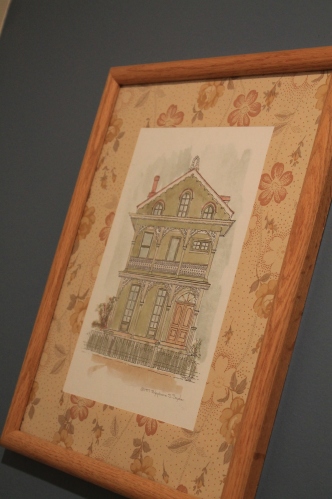 After I stopped over thinking the math, creating the mat was easy.  Seriously, I was measuring, dividing and subtracting for some ridiculous reason!  Then it went off like a lightbulb – 2 inch framed matting was all I needed to know. Duh! 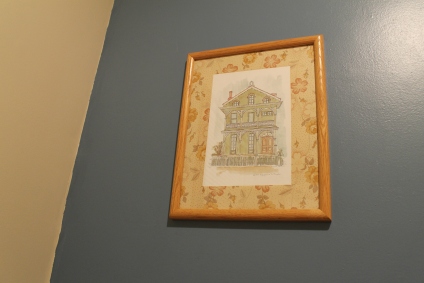 Can’t wait to use the rest of the wallpaper remnants in other projects!

6 thoughts on “out with the old”