One year ago today my life changed. We brought home our little baby boy. Our fur baby beagle.  And named him Wilson.

So many people ask why “Wilson”. He simply looked like a Wilson to us. No other reason. He also answers to: Mr. Wilson, Silly Willy, Buddy, Bud, Baby, Baby Boy, Pup, Sweets, Handsome, My Little Pet and any other variation of these.  Oh and sometimes Cher.  He likes that nickname. 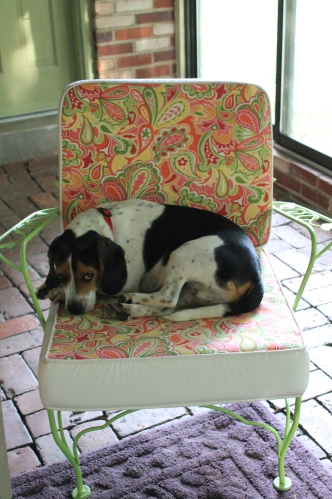 Wilson’s story is a little bit of a tear jerker. Don’t worry there is a happy ending though. Obviously.

Last August, I was perusing Facebook when I saw this exact picture pop up in my news feed. Of course I clicked on it and learned that the puppy was up for adoption.

Do you see how sad this homeless little guy looked? He had no tags, no microchip, no lost dog posts. No one was looking for him.

The owners of the Arden Theatre in Philadelphia were on their way to work that fateful morning when Wilson was running in traffic on I-95! It is amazing that he survived. The good Samaritans stopped their car and cornered him until he submitted. He was so scared. A true rescue!

They brought Wilson to the theater where the staff helped nurse him to health. Affectionately, they called him Dodger since he survived dodging lanes of traffic. He was incredibly malnourished and in need of a bath and vet visit which they took care of immediately. He hung out at the office for a couple of days. Luckily for Wilson, the Arden is pet friendly!

Meanwhile I immediately emailed Ryan the Facebook picture of the sad orphan in need of a permanent home. Ryan responded within minutes simply saying ‘yes’. We had been talking about getting a dog. Preferably adopting one when the right opportunity came along. And here he was!

Just a couple of days later Wilson came home with us. Yay! Here’s a picture of our new family outside of the Arden when we picked him one year ago today.  He was a little camera-shy back then but that has changed. 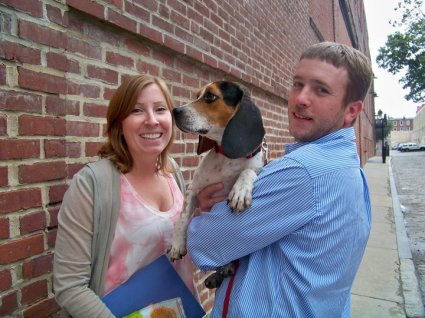 We weren’t sure how Wilson would transition to his new home considering he’d been living on the streets for what seemed to be weeks. We had a few sleepless nights in the beginning and several accidents. Wilson seemed to know some commands but just needed to be reminded of them.  We assumed that he was about a year old when adopted him.

At first, he didn’t make a sound.  In fact I wasn’t sure if he knew how to bark.  That all changed.  Suddenly he wouldn’t be quiet! Wilson would howl uncontrollably for hours if we had to leave him. We know because neighbors  told us.  He has a very deep voice for such a little guy.

Fortunately, Wilson overcame his separation anxiety after a few long months. We tried many routines to make him feel comfortable staying alone in his new home.  We wanted Wilson to know that we would be back and he would not be abandoned again.  What finally worked was letting him stay in bed.  Turns out this dog just liked to sleep in!  I think staying in the bedroom made him feel close to us and secure. 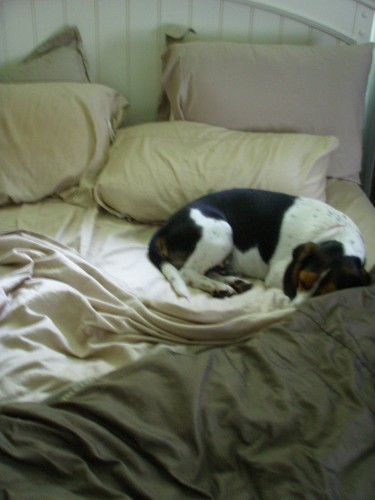 Now he’s totally independent. So much so that he thinks he can take walks around the neighborhood on his own to visit other dogs. Overall, he has turned out to be the perfect little love bug and companion. He was simply in need of a home and a family to love him.

swimming in the bay 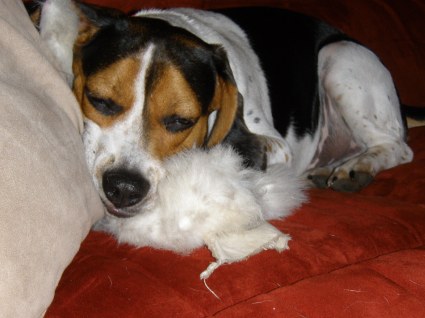 long walks on the beach 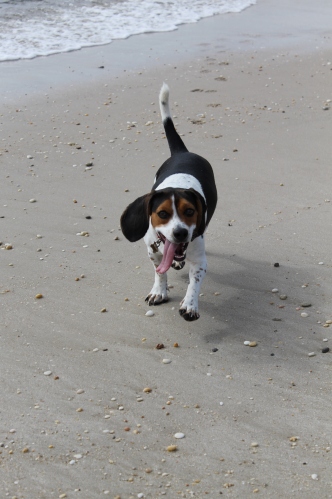 spending time with his puppy friends

And he really, really loves his sweater collection. 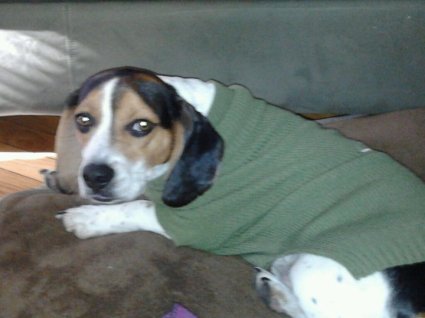 Tomorrow we will celebrate Wilson’s “2nd” birthday!  We are so happy that he found us.  Thanks Arden for rescuing our little pooch!