Hi friends!  I am here to talk a little garden today so get your green thumb on.

Half of our front lawn is covered in English ivy.  When we bought the home the ivy was growing on the front brick as well.  I thought it was charming.  Kind of like a little cottage nestled in the rolling hills of Ireland.  Then reality set in.  We’re not in Ireland nor do we have interesting accents.  Plus that ivy growing on the house was really bad for the structure.  It was clinging to the windows for dear life and rooting itself into the grout between bricks while also roping around window wells and trim and anything else it could get its grimy little roots on.  And I could keep going.

The shiz is invasive. The English ivy found out who was boss when Ryan drastically cut it back from the house.

We still had a front lawn full of it though until just weeks ago.  We decided to tackle one small section that was located in coveted full sun.

I swear it is only about a 10x10x6 space but it took us no less than 12 man hours to transform it to just this. 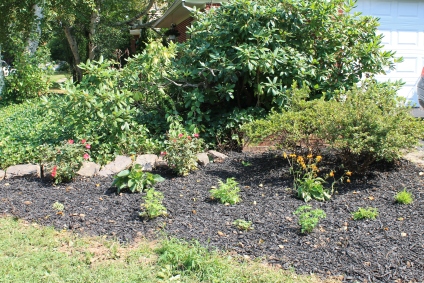 Removing the invasive ivy is much like removing wallpaper, as Ryan put it.  The perfect analogy!  It was a tedious battle of stripping sections of the plant and its roots out just like pulling down wallpaper.  Once that was completed (probably 11.5 of the 12 hours mentioned) I planted a perennial garden.  It doesn’t look like much yet but this time next year that sunny little spot will be blooming with some of my favorite easy to grow perennials including…

All photos are via pinterest.  You can follow my garden pinboard for more pretty images that I hope to find blooming in my garden soon!

Believe it or not you can plant a perennial garden such as this late in the summer.  I know we normally do this kind of planting in spring but I saved major bucks by waiting.  Most garden centers with perennials left late summer drastically reduce their prices in the hopes that they will at least make what they paid for them.  It is worth your time and effort because perennials come back and bloom every year.

Not every perennial is worth buying late in the season though.  A few things you should know when buying perennials late:

Thanks for indulging in my perennial garden with me.  I hope to have much prettier ‘after’ images for you next summer.  In the meantime, I’m saying goodbye to this summer Labor Day weekend on a crab feast cruise with friends!  Do you have any exciting plans to bid farewell to summer?