You know that David Bowie song “Ch-Ch-Changes”?  Well that tune is sort of playing in my head as I write this post.  I’ve been on a bender lately. Re-doing every room in the house.  Re-doing this website.  Makeover city.  I just want to change it all!  What do you think of the new look here at circadee.com?

The scariest part of the bender has been the furniture buying part.  I can not stop.  I know I have a problem.  Admitting it is half the battle, right?  That’s what I told Ryan when I brought the last chair home.

So you might be thinking that this doesn’t sound like a problem for a vintage dealer.  Buying is part of selling.  And you are correct.  Absolutely.  However, I want to KEEP every chair I have bought.  I want to re-do every room in my house around these vintage finds.  Basically I am just shopping which is different than buying in my book.  It is a fine line.

See where does the problem come in?  I am losing sleep thinking about ch-ch-changes I can make around here.  Ryan is pretty much ready to have me committed.

I think the tip of the iceberg was when I convinced him that his coveted overstuffed 90s big red recliner sofa had to go.  I am so over that glorified lazy boy taunting me in the living room.  The color is so wrong especially since we updated our dining room.  Domino effect.  You know how it goes.  Being the doll that he is, Ryan agreed that we had a good run with that free sofa.  He suggested buying a brand new couch.  I don’t really do brand new.  I do vintage.  You know that.  So I pinned away.  Mid-century sofas yes.  Then I cruised craigslist at a rapid pace.

Ultimately I found a brown velour, long and lean luscious mid-century sofa.  No it’s not tufted, darn, but it was a steal so I jumped on it.  I had originally spied it at the thrift store weeks prior and when I went back post the conversation about big red’s demise, I was shocked to see that it was still there.  I took that as a sign that it is meant to be.  Maybe it was a sign that everyone else thought it was hideous.  Not me.  After dragging it into the sunroom in the dark and snow Ryan decided he wasn’t a fan.  Shocker.  It is currently getting shampooed.  I may love old but I’m a actually a bit of a germaphobe too.

The very next day after the dragging through the snow incident, I followed up on a craigslist ad.  The seller had not one but two highly desirable and cheaply priced chairs.  Omg.  I told myself and the seller that I was mostly just interested in the roller office chair she had listed.  Because I actually sold my last one right out from under me.  True story but I didn’t tell her that part.

We arranged a time for pickup.  I told her I would like to take a look at her midcentury side chair as well while I was there but I was definitely interested in the wheely office number.  Yes I was!

A few hours later, Wilson and I arrived to take a look.  I instantly fell in love with the midcentury side chair.  “Where is the office chair?”,  I asked.  Oh she sold it early that morning.  My chair!  Sold.  Who does that?  I agreed to buy it.  Well I drove the 40+ miles round trip for that darn office chair and, Wilson is my witness, I would not leave there empty handed.  So of course I bought the midcentury chair.  I’ll show that seller!  Hmmph. 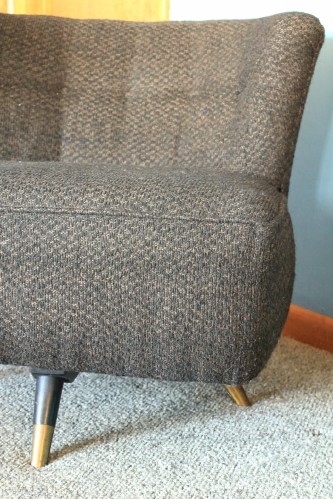 I took my new treasure home because of course I have just the thing to go with it.  A fabulous art deco mantel that was sitting in my garage at the time.  They will look great together…in there.  Well they’ll seriously look great together just as soon as they get settled into the new and improved living room at the beach house.  Pictures coming soon…

That mantel, by the way, was another one I thought long and hard about after I spied it at one of my favorite antique stores.  When I went back a few weeks later it was still there.  Fate I tell you.  Garage door swings open.  Mantel goes in with the stash. 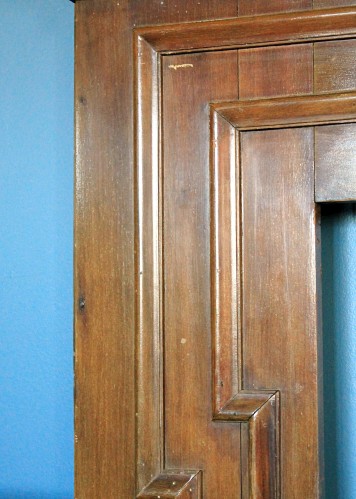 Speaking of the stash, I have been housing a great big French provincial china cabinet for longer than I’d like to admit.  I want to paint it.  I have so many ideas for the color combo but the fact is 9 months have passed and I need to move on.  I am considering selling it unfinished because who knows when I will get to it.  Want to DIY it?  If you’re local email me and you can buy it as is or it can be custom painted just for you.  Here it is…

In the midst of this furniture bender, I briefly considered getting a storage unit to house my treasures.  I quickly realized how ridiculous that was and instead sent an S.O.S. to my brother and sister-in-law, new home owners, to see what they might want to take off my hands.

Tell me I’m not alone.  Is your partner entirely over your hoarding and constant redecorating?  But more importantly, how much do you love my newly acquired pieces and the new site design?

One thought on “on a makeover bender”