I love that phrase – farm to table.  It sounds like such a basic concept.  It is one that we’ve embraced recently in our house.  Well, I guess it has been more like farm to store to table.  But once the harvest season starts it will definitely be more farm to table.  Anyway…

First let me say thank you to so many of you who have consistently followed up with us on Ryan’s MS diagnosis last fall.  He is doing just wonderful.  In fact, much better than before.  And me too.  We have embraced new routines and ditched a few old ones.  Mostly we’ve been really cognizant of what we’re eating and how our meals are made and, most importantly, how those foods impact Ryan.

I’ve never been much of a chef and I’m no food blogger.  There are plenty of fantastic blogs out there for recipes and such but as I’ve been sharing some of my new recipes with friends, they encouraged me to post about it.  Perhaps you’ll have an interest too.

We haven’t become vegetarians or anything official but we’ve embraced a highly vegetable based diet and legume based for that matter.  The turning point was receiving my first ever food processor at my bridal shower.  We ate veggies before but usually in a raw or steamed state as a side. Nothing fancy.  The food processor has hands down changed my life.  And I actually like cooking and experimenting in the kitchen now.  I had no idea how versatile chick peas are!  Yes, I’m getting excited about chick peas.  That’s the new me. 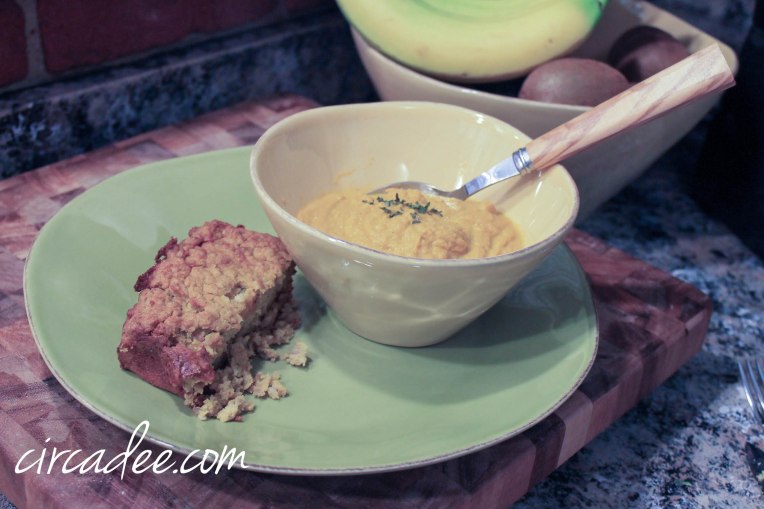 Sweet potato stuffed pepper with a garlic cream sauce – hands down, my favorite so far although probably the least photogenic.  Can you believe I never ate a radish before now?

Mediterranean loaf (with basil, pepper, tomato & mozzarella) – Ryan thinks we need to come up with a new word for “loaf”.  I agree.  Any suggestions?

Smoked salmon salad – an oldie but goodie.  I think we may be headed down the path of pescetarian but again, no official commitments here

Mango vanilla smoothie – we still go for the ol’ classic strawberry smoothie on the reg too. Apparently I don’t have pictures of either.

I seriously shock myself with my new found kitchen prowess.  Ryan is feeling very healthy and active which is the goal when you have MS.  You want to keep a high energy level and remain active so the disease doesn’t creep up on you.  Certain foods, like kiwi, can increase your energy level.  He’s even lost weight.  Men, they lose it so easily!  Hmmph.

And we LOVE doing yoga.  It is so relaxing & strengthening.  I find it helps me a lot with stress.  I never thought I’d become an organic, yogi but I think that’s the path I’m on.  Ryan continues to do all of the things he loves like fishing & bike riding.

It’s funny how life has a way of throwing you curve balls.  You can either let it get you down or embrace it and make the best of it.  I’m pretty happy with how we’re tackling Multiple Sclerosis head on over here

So what healthy recipes should I try next?

5 thoughts on “farm to table”