I finally did it.

Yep, I finally made my own healthy and light butternut squash soup.  After hearing about my mom’s and mother-in-law’s versions.  I decided to try my own spin and so Apple Butternut Squash Soup was born over here on a chilly October day. 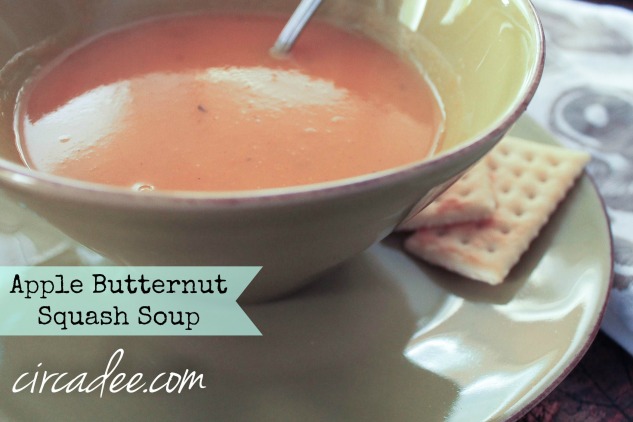 It was simple, friends.  There was barely anything left in the refrigerator except for a large butternut squash taunting me.  Plus 3 golden apples – I can’t remember the variety.  And 3 lonely, nearly forgotten about radishes.  I know.  Radishes.  What do you do with these other than throw them in a salad?  I found out that they taste pretty darn good in a warm creamy soup.  Radishes seemed to give a little bit of bite where you might otherwise use an onion.  An onion we didn’t have.

So that’s where I started.  I chopped and peeled the squash, apples and radishes.  Then boiled the chunks in a large sauce pan.  Once soft I pureed them all in a blender.

Once the fruit and vegetables were a nice creamy consistency, I tossed them back in the empty sauce pan along with 16 ounces of vegetable stock and let simmer.

About 20 minutes later, we had this healthy soup for lunch!

Alongside the soup, I came up with a fantastic new smoothie that was a little bit more like dessert!  It consisted of a banana, spoonful of peanut butter, spoonful of raw honey, 2 spoonfuls of vanilla Greek yogurt, kale and about half a cup of coffee.

Yum!  It was a mid-day energy boost.  And surprisingly, the flavor complemented the Apple Butternut Squash Soup so well.  We’ll call this one the Java Green Smoothie.