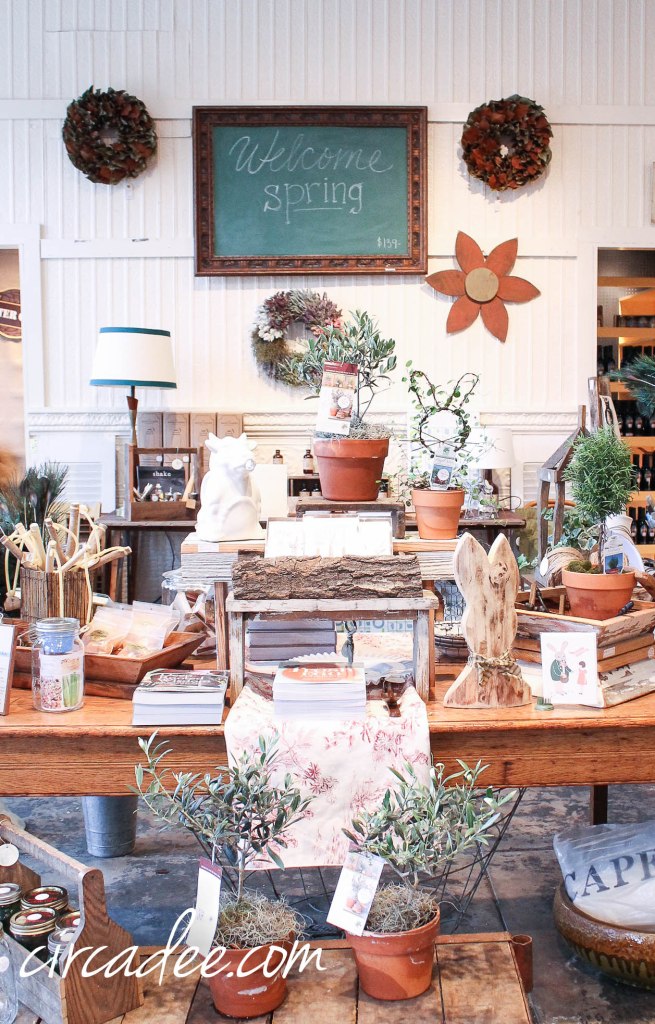 This approach to buying inventory is something that I have been reminded of lately and have found myself telling others who are just starting out.  I think it is really important to love what you are selling.  Don’t choose it or make it just because you “think” someone else will love it.  Now granted, not everyone will have the same taste as you.  For example, I have a growing collection of old ship captains, ahem.  However, I believe the authenticity of your merchandise will show through when you are passionate about what you are selling.  It’s hard to honestly sell something you don’t believe in.

With that said we’ve stocked a few choice cookbooks and gardening books to keep in line with the garden to table collection we have at The West End Garage.  I am really excited about the line up. We have Deep-Rooted Wisdom, a new release authored by blogger Augustus Jenkins Farmer.  I am about half way through this book and I’m loving the gardening tips, stories & characters.

People have asked me how I chose which books to carry.  Well, I initially took the lead from a few tried and true favorites in my own kitchen stack of cookbooks and cocktail books. 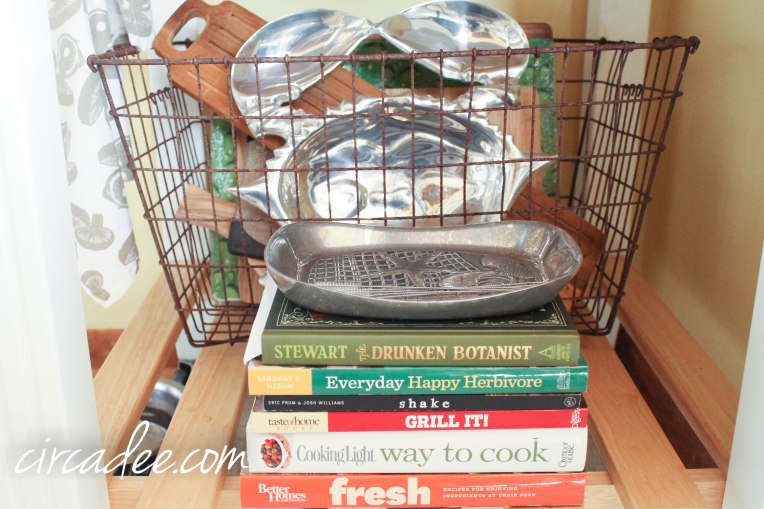 The Kinfolk Table has since been added to that stack.  It has quickly become a favorite for two reasons.  One, the photography and stories are beautiful.  Of course I love a good aesthetic!  Two, the recipes are really approachable made with pantry staples that we pretty much always have on hand.  Essentially the book lends new ideas with classic ingredients.

I have been inspired to make many of the soups and stews outlined in The Kinfolk Table.  A few weeks ago I made the Wilted Greens & Potato Soup on page 287.  I hadn’t thought to put kale in soup until this recipe.

Great idea.  We loved it! 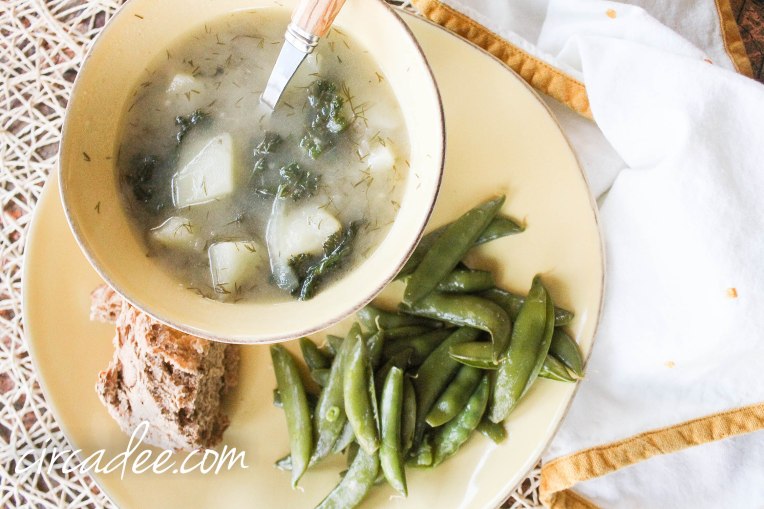 What is your favorite gardening or cookbook?

Tortilla soup, that is!

I adapted part of this recipe from Happy Herbivore (which I am a big fan of) but gave it my own spin.

It all started with a jar of salsa and a 15 oz can of pinto beans.  Not the most glamorous ingredients in the world of eating fresh plant-based foods but the pantry choices were slim and we were in the midst of a snowstorm.  So my friends, the two main ingredients came from a can and a jar.  And I think it’s quite genius in a pinch.

Puree 1 cup of salsa, 1 cup of the beans with 1 cup of broth.  Fortunately I made my favorite French Onion Soup the night before so I simply drained a cup of the flavorful broth from there.

Once blended into a creamy broth (you know how I love creamy soups, right?) I transferred into a stock pot.  Adding a fresh diced mango, another half cup of salsa and a teaspoon of cumin.

I let the soup simmer on low while juicing mangoes.

The soup was served with feta cheese and Late July brand tortilla chips, which I also love.  Yep, I go heavy on the feta.

There you have it, spicy tortilla soup in a bind.  Super tasty and ready in under 30 minutes!

Let me add that in the future I am going to make this as a follow-up to Taco Tuesday.  Usually there are diced tomatoes, peppers and more left over that I am going to try as a fresh substitute for the jarred salsa.

Hello!  Hello!  How was your Thanksgiving weekend?  We were on the move for 4 days straight.  I managed to steer clear from all of the mall madness and put in some serious time antiquing.  More about that later this week…

Now that your Thanksgiving leftovers have ran out, I’ve got another tasty soup recipe for you.  One of my favorite things about creating new recipes is naming them.  Actually I feel this way about most creative projects.  Once something new is produced, I love to step back, evaluate and then brand the package.  With that said, I introduce you to my newest comfort food…Baked Potato Soup.

Can I let you in on a little secret though?  It is not really baked at all.  More like boiled and mashed.  But Baked Potato Soup sounds better.

Start by peeling and washing a couple of pounds of potatoes.  Place them in a large pot of boiling water.

While the potatoes are cooking, caramelize a large chopped onion in a separate pan.

Once the potatoes are soft, drain most of the water and combine with the onions.  Blend with an immersion blend.  Season with salt & pepper.  Garlic is good too if you’d like.  Basically season as you would mashed potatoes.  Don’t stop there though!  We’re making soup, remember?  Now add a cup of stock for each pound of potato.  This will thin it into a nice creamy potato soup base sans any heavy cream or dairy.  Allow it to simmer on low-medium in the stock pot with the lid on.

At this point, you can add in vegetables of your choice like broccoli or asparagus to create a dairy free ‘cream of (fill in the blank) soup’.  I took another approach in order to make this soup more personal and interactive. 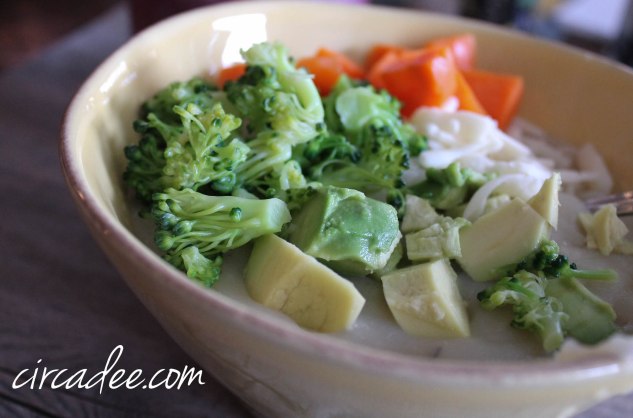 I chopped and steamed fresh vegetables separately along with shredded cheese.  The options are pretty much endless – carrots, avocado, broccoli, peas, mushrooms and even bacon if you want.  Just don’t forget the cheese!  It will melt right into the base of this dish – the warm baked potato soup.

I served my hearty Baked Potato Soup along with a berry smoothie filled with antioxidants.  Yum! 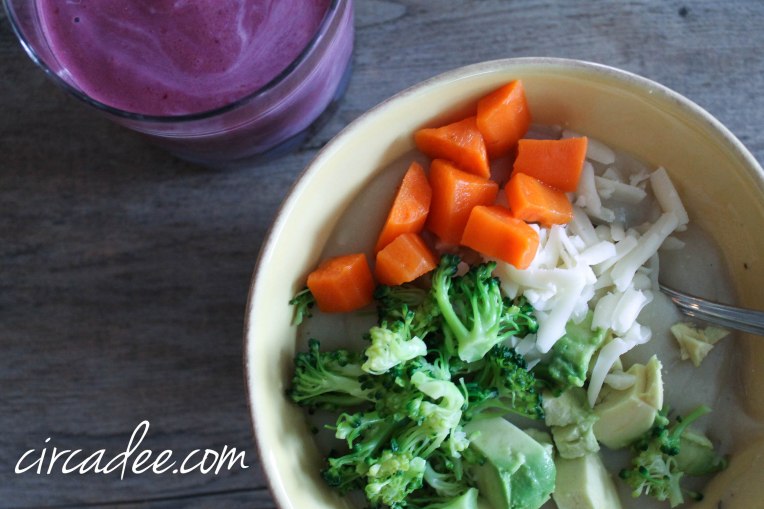